Disclaimer: We attended the Tofino Food & Wine Festival with the support of Tourism Tofino. All opinions, as always, are my own.

Tofino, a trendy surf town on Vancouver Island, off of Canada’s west coast. Tofino is known around the globe for it’s world-class waves and whale watching, but it’s not the first place you’d expect to find an first-rate food & wine festival. But here, among the breaking surf & pristine windswept beaches, tucked away in the rain-forest, the Tofino Food & Wine Festival’s Grazing in the Gardens event is quietly but confidently striding into its 5th consecutive year, and the Food & Wine festival as a whole, into its 16th.

Now, I’m not a foodie, but thats not to say I don’t thoroughly enjoy a good meal, beer or glass of wine. In fact, I love to eat… It’s a Problem… I simply dont identify as someone driven by the pursuit of exceptional food. Adventure, yes, discovery, yes, but food… It’s just not not my first priority. An adventure for my taste buds though, thats something I can get behind, and with the generous support of Tourism Tofino we did just that!

The Tofino Food and Wine Festival is only one of the many ‘shoulder season’ festivals Tofino offers, a great reason to visit early or late in the year avoiding the summer chaos!

The festival began as a small local event, but it’s grown into a destination for foodies and wine lovers from across the country and internationally. From winery hosted dinners with perfect pairings to cocktail and tapas showcases nights and even an afternoon garden event  happening over the first weekend in June the Tofino Food & Wine Festival has something for everyone!

We were late to the game honestly and were only able to secure tickets to one event rather than all six, but we still had a blast and manged to explore some of the best that Tofino has on offer, read on to find out about Grazing in the Gardens…

Stepping inside the beautiful Tofino Botanical Gardens was like stepping into another world. We were greeted by laid back Tofino atmosphere and beach vibes as we should have expected. The 12 acre waterfront rain-forest, dotted with pocket gardens, was alive with the sounds of music and the wafting smells of the delectable delights we were about to experience first hand.

Hugely popular with both locals and visitors alike, tickets to the event are bound to sell out every year and include an awesome commemorative wine glass. Featuring more than 75 British Columbian wineries, cideries and craft breweries paired with gourmet canapes from local chefs and Vancouver Island’s best artisanal producers it’s no wonder why.  Grazing in the Gardens also helps to raise money for local charities and is designed to help expose this burgeoning foodie destination beyond Vancouver Island’s west coast. 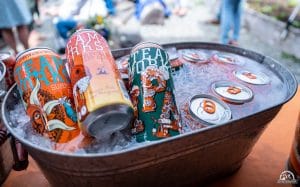 The growing craft brewer and distillery scene on Vancouver Island is well represented here. Small batch distillers are sampling their award winning hand crafted gin’s, and vodka’s, one of my favorites was the Ampersand Gin.

Small batch craft brewers made a splash, a refreshing change from the amazing wine’s and ciders I’d sampled so far. Longwood, Phillips, Steamworks and other local staples were well received by attendees and paired deliciously with locally crafted food.

A flourishing local British Columbian winery scene was well represented at Grazing in the Gardens. The Tofino Wine & Food Festival drew in vineyards from around the province and with them their locally and internationally acclaimed wines!

Some of the top Tofino restaurants & chefs are here showcasing the best of the west coast food culture and we were never without a tasty treat in hand. Everything from blackberry braised duck to locally caught prawns and even onsite, fire cooked salmon was on offer in the gardens.

As another attendee put it, it was kind of like Halloween in the spring, you walk up to a strangers booth, you’re greeted by smiles and a tasty treat and then they understand fully when you dash off to the next table on the trail. Around every corner, in every little nook of the garden we found booth after booth pairing the best wines and snacks I’d ever tasted.

Grazing in the Gardens Video

The Tofino Food & Wine Festival indeed showcases the very best of what the region has to offer and does it in a way that inspires people to go out, connect and experience the culinary delights that are available in their own back yards.

You see, Tofino is so much more than just whales, waves, surfing or storm watching. Tofino’s food scene is hopping, its beers/wines and ciders are on point and all the cool kids know it. That’s not to say you should pass up partaking in a little beach time, catching a sick break or exploring the best of it’s national park reserve, just make sure you stop in to one of the amazing local eateries afterwards and devour some of the scene’s best. Better yet, make a note and stop in for next year’s Tofino Food and Wine Festival.

While I might not be a full-on foodie, I’ve already marked this weekend in my calendar for next year and hope to be able to get back here again! Have you visited Tofino? Did you have a chance to check out the amazing food scene? Let us know what your favorite spot was, we’d love to connect! Drop a comment below to touch base with us on Twitter, Facebook or Instagram!