Ask anyone about Iceland, no doubt they’ll start picturing soaring mountains, roaring waterfalls and endless glaciers. But in a country of fire and ice, geothermal hot springs are one of the best ways to pass the time. Iceland’s Blue Lagoon is no doubt the best known spring in the country.  Let’s face it, no one, and I mean no one, plans a first time trip to to Iceland without seeing the Blue Lagoon.

The hotsprings in Iceland are a national treasure, a part of the Icelandic cultural identity and hold a certain undeniable appeal. In fact the Blue Lagoon is Iceland’s most visited tourist attraction. Let alone it’s most visited hotspring and I’m going to find out why.

If soaking away your worries in Iceland’s iconic Blue Lagoon is high on your bucket list read on to learn all about it and its secrets!

After paying our entrance fee we caught our first glimpses of the lagoon.

Wispy clouds of steam dance and drift from the warm waters into the cool air. The beautifully creamy-blue opaque water stands in stark contrast to the surrounding black lava field covered with a layer of rich, dark green moss. It’s as if I’ve fallen into the pages of a magical fairy tale from my childhood. Is this real life? Pinch me!

But Iceland’s Blue Lagoon is every bit as real as you or I. Excitedly we changed and bee lined it straight for the lagoon…

The brisk evening air nips at now bare skin and the urge to sink into the sweet heat of Icelands Blue Lagoon is undeniable.

Wading into the warm water is an intoxicating feeling after such a long day of travel from Canada’s west coast. The milky-blue waters of the Blue Lagoon seem to melt your stresses away and before long im completely at peace having found a secluded seat along the edge. It’s like a whole new world.

Soon the cool (but expensive) libations at the swim up bar were calling my name and I had to enjoy the Icelandic equivalent of a shower beer.  The very creatively named Lagoon Bar offers something for all ages, smoothies, ice slushies, wine and beer all without having to carry any money.

ProTip: It’s easy to fall into the trap here. By charging the drinks and food during your stay to your RFID wristband rather than physically dealing with cash its not uncommon to spend more than planned. Buyer Beware!

So Why Visit Iceland’s Blue Lagoon?

The naturally mineral rich waters of Iceland’s Blue Lagoon are said to have healing properties. Everything from skin conditions like psoriasis to achy joints and arthritis is claimed to be cured by its believers. The silica mud and alge masks offered with your entry package are apparently great for your skin —and honestly, who doesn’t like pretending to be a monster from the deep for a minute or two?

The blue lagoon of Iceland sports world class amenities to go alongside your soak. The critically acclaimed restaurant —Lava —is carved into the volcanic rock above the blue lagoon. World renowned spa treatments are available on site and the in water massages seem to be a big hit! Saunas, steam baths,  lounges, a hotel and a cafe round out the lagoon’s offerings. 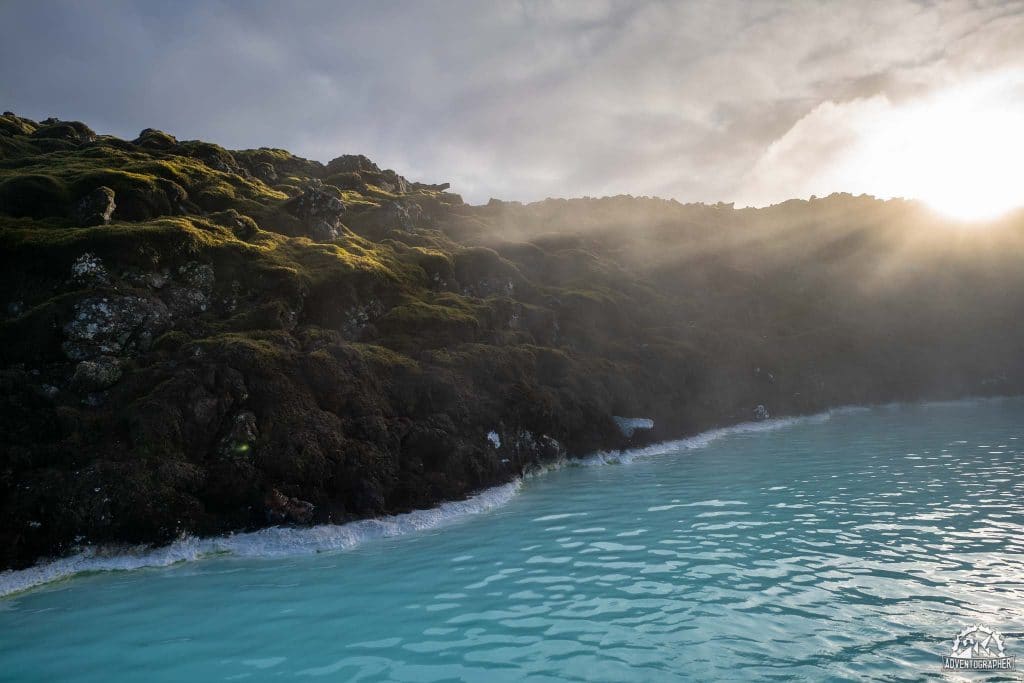 Aided by the international media —National Geographic that named it one of it’s top 25 Wonders of the World. While Condé Nast Traveller has called it one of the top 10 spas in the world —Icelands Blue Lagoon is internationally recognized and sits on the top of many travellers bucket-lists across the globe.

Even with all this press, a first time visitor to Iceland’s Blue Lagoon might be surprised to realize that there are some important details left out. The Blue Lagoon is always high on the potential traveller’s to do list so let me fill you in about this iconic attraction.

1) The Blue Lagoon Isn’t in Reykjavik

Located 40 minutes southwest of Reykjavik, near the Keflavik airport you likely flew into, the Blue Lagoon is a bit out of the way! While its a trek to get to the lagoon from Reykjavik the coastal drive is nothing short of stunning.  On one side the coast stretches as away into a vast blue nothingness. On the other, moss covered lava fields and distant volcanic peaks remind you of just how this island nation came into existence.

Getting to the Blue Lagoon

If, for some reason, you don’t have your own transportation (like our Happy Camper) or haven’t picked it up yet the Blue Lagoon offers frequent, scheduled bus transfers to and from both Keflavik Airport and Reykjavik.  Taxis and private tour transfers are also available but typically not comparable in price.

Say it isn’t so! Iceland’s biggest tourist attraction isn’t the natural wonder of the world it’s been portrayed to be? We’re so quick to believe things we want to be true. In this case though, we’ve been misled. Icelands Blue Lagoon is actually the happy byproduct of local geothermal power generation. 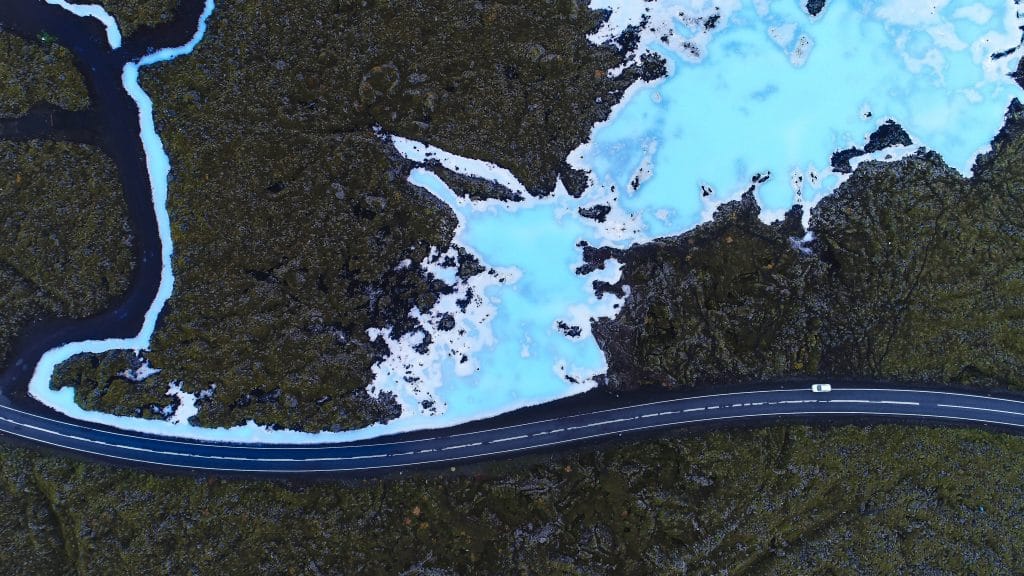 Fun Fact: Over 85% of iceland’s total energy needs are supplied by renewable energy! The remaining 15% or less constitutes fossil fuels used for transportation of people, products and food.

As a Canadian I usually consider Hot Springs natural formations. While I might expend some energy getting to (hiking etc.) them I typically don’t have to pay to use them. If you think like me throw that idea out the window for Icelands Blue Lagoon!

The base package at Iceland’s Blue Lagoon starts at 6990ISK (or close to $90 Canadian). It rises to over 53,000ISK ($690) if you want a private change room and access to the exclusive lounge. Add in spa services or massages (which I’m told are to die for) and you could easily spend a mint here. Iceland is expensive, and while there are cheaper alternatives, when in rome… right?

If you’re travelling on a budget or simply not down to fork out that much of your hard earned cash for Iceland’s Blue Lagoon there are several other good options in the country!

Check out the sweet heat of Secret Lagoon which lays along the Golden Circle Route.  The Secret lagoon is much less commercialized when compared with Iceland’s Blue Lagoon. You’ll still have to drop nearly 2800 ISK ($36 CAD) to soak in its therapeutic waters (And that was the low season rate!).  The Laugarvatn Fontana geothermal baths are another hotspot near Reykjavik on the Golden Circle. But yet again you’ll be paying for entry.

4) Iceland’s Blue Lagoon isn’t as intimate as you might expect!

It’s a full blown spa! Some of the images and video you’ve seen online seem to show the Blue Lagoon as a small, intimate and romantic spot. In reality the lagoon itself is HUGE and around it a full spa and hotel complex have been constructed to cash in on it’s popularity.

That said it’s not impossible to find a corner to yourself. Search out the far edges of the lagoon in order to have a somewhat more intimate moment if the thought compels you. By visiting at off peak times you might find the lagoon quite quiet and peaceful.

Remember that the blue lagoon isn’t where the locals come to hangout. Day of the week does not seem to matter. Nor do Icelandic holidays or special events. A visit early in the morning or just before closing seems to be the ticket to enjoying a soak without a full house!

So, apparently shower cops are a thing…

So, apparently shower cops are a thing here. Not unlike many other spa’s around the world, at Icelands Blue Lagoon you’re required to shower before entering the pool. Iceland takes this a step farther. Don’t be surprised when you enter the change rooms at the Blue Lagoon only to find a shower monitor ensuring everyone strips naked and washes properly.

With a european attitude towards nudity in iceland this is common practice, but with such a diverse crowd from different cultures across the globe the blue lagoon is doing its best to ensure everyone strips, scrubs & follows the rules. For those of you who are a little more bashful a set of private showers with locking doors have recently been installed in the changerooms.

While it was a little weird at first to have a security guard wannabe on shower duty; I honestly don’t hate the idea. The last thing I want to do is jump into an unfiltered bathtub when the soup’s ingredients consist of a bunch of grimy people!

6) Iceland’s Blue Lagoon Isn’t The Only One

The Blue Lagoon is no doubt the best known of the hot springs in Iceland. However if you ended your search for the perfect Icelandic hot pot there you’d be missing out!

Iceland is home to literally hundreds of hot springs. Some well known and highly trafficked. Others held close to the chest as secrets by the locals and fiercely protected. I talked all about my favorite hot springs in Iceland in this article! But if you’re still on the hunt for something a little more substantial than a simple pool in the middle of a field in the countryside I’ve got you covered.

There are more than a couple ‘developed’ hot springs and baths around Iceland. None however to the same level as the Blue Lagoon.

Staying near Reykjavik there’s the well known Secret Lagoon and Laugarvatn Fontana along the famous golden circle route. Both offer cafe’s, change rooms and saunas in a way that simply feels more authentic to the culture than the upscale chic vibe that Icelands Blue lagoon seems to be targeting. Be sure to stop by the geothermal bakery to try the Icelandic Hot-Pot Rye bread. Grandmothers of the area have been baking it using the spring’s heat for generations!

On the opposite side of the island nation you can find the Mývatn Nature Baths where you can enjoy a hot soak after touring the Grjotagja caves and lava fields.

Tips for Enjoying your time at Iceland’s Blue Lagoon

While you’ll no doubt have a great time at Iceland’s famous Blue Lagoon I’ve put together a quick list of tips that will help you bathe blissfully:

Have you been to the Blue Lagoon?