Action Cameras, sometimes better known as GoPro’s™, they’re small, they’re simple, they’re tough and they’ll get the shot that no other camera could hope to capture. Unlike any other kind of camera, they’re designed to be attached to bikes, helmets, surfboards, skateboards, cars or any other objects your heart desires. Unfortunately however, the big brand names come with big prices so we’re going to look the the best budget action camera on the market & best action cameras under 100 dollars!

The action camera’s small size and epic, wide-angle, point of view footage have made them popular with the extreme sports crowd who mount them to helmets, sports equipment etc to share their daring escapades. As with anything pop-culture the trend has grown. Now you’ll find anyone from extreme athletes to travelers and even feature film productions using these little cameras and sharing what they capture on YouTube. 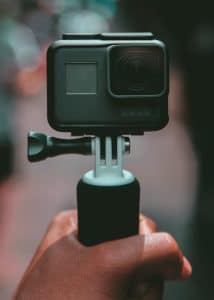 GoPro’s Hero series of action cameras is no doubt the dominant force in the action camera market. But it’s not the

budget friendly option. Even stripped down versions of its cameras, like the new 2018 GoPro Hero, cost $200 and the fully featured Hero 7 Black Edition runs more along the lines of $400 for the basic kit.

So whats the catch?

These high end features also pump up its price. In the age of getting cheap airfare that $300 difference could mean a round-trip ticket across the globe. Would I turn down a Hero 7 if it was given to me? No way! I’m just not prepared to buy one for myself when so many budget alternatives exist.

While the GoPro Hero series may be the de facto leader in the action camera world there have been challengers over the years. Many of these, from iffy manufacturers, pushing intellectual property law to the limit. In fact, if you search Amazon for “Action Cameras” you’ll notice that a majority of the results bear an eerie resemblance to the standard Gopro Hero 2/3/4/5/6 design.

IP theft continues to be a huge issue in emerging markets and not something that we here at Adventographer condone.

So Here’s the deal…

For the purpose of this article I’ll choose to believe that a choice was made in order to to make use of the existing GoPro accessory ecosystem and not to blatantly rip off another company’s property… And when we look at it that way, who wouldn’t want to save over $300 to get a—arguably better than the original—GoPro??

I’m not made of money are you?

GoPro’s discontinued lineup of golf ball sized Hero Session’s (4 & 5) are still readily available to the public and represent quite a deal! That deal gets even better when you find factory refurbished units! Repaired and inspected at GoPro Headquarters these might-as-well-be-new cameras cant be sold as new and come available at a huge discount!

With a pint-sized powerhouse in the palm of your hand you’re able to capture stunning 1080P video (at 60P, hello Slo-mo), 8 megapixel still images and even time-lapses, above or below the waves and without the need for any kind of external housing!

On the downside, the session is only waterproof down to 10m/33′ with the lack of a dive housing and its built in battery cant be swapped out for continuous on location recording. So you’ll have to hope to don’t kill the battery trying to capture your epic shot.

All in all this micro camera is still a great deal! Definitely one of the best action cameras under 100 dollars!

Save $300 With A Great Budget GoPro Alternative

Although the Yi Lite Action Camera comes off as minimalist at first glance it’s loaded with features and comes in just below the $100 mark. Representing a just under $300 savings when compared to the Juggernaut GoPro Hero 6!

But that’s not all…

This relatively unknown brand is strutting into the ring with its best foot forward. Packed with advanced features and image quality we cant fault for the pricing the Yi Lite (and its big brother the Yi 4K+) came ready to rumble.

For a couple dollars more than the Yi Lite budget action camera you can get the SJCam SJ5000. Sporting most of the same features of the Yi Lite but including a Waterproof housing (vs selling you one afterwards) this setup is ideal for most travellers seeking out a budget GoPro alternative.

It wont take you all day to edit your footage either! The clean 1080P footage is a breeze to edit on any old smartphone, tablet or laptop without worrying about having the newest or most powerful gear. The SJCAM is one of the best budget action cameras I’ve put my hands on.

While there are no doubt better actions cameras on the market than we’ve looked at here I think each of these sub-$100 action cameras provides a great value. Knowing what you’ll use an action camera before you guy one will be the key deciding which to buy and to saving the most cash.

Either way you cant go wrong with any of the best action cameras under 100 dollars on this list!